A Melding of Worlds: Interview with Julie McLaughlin 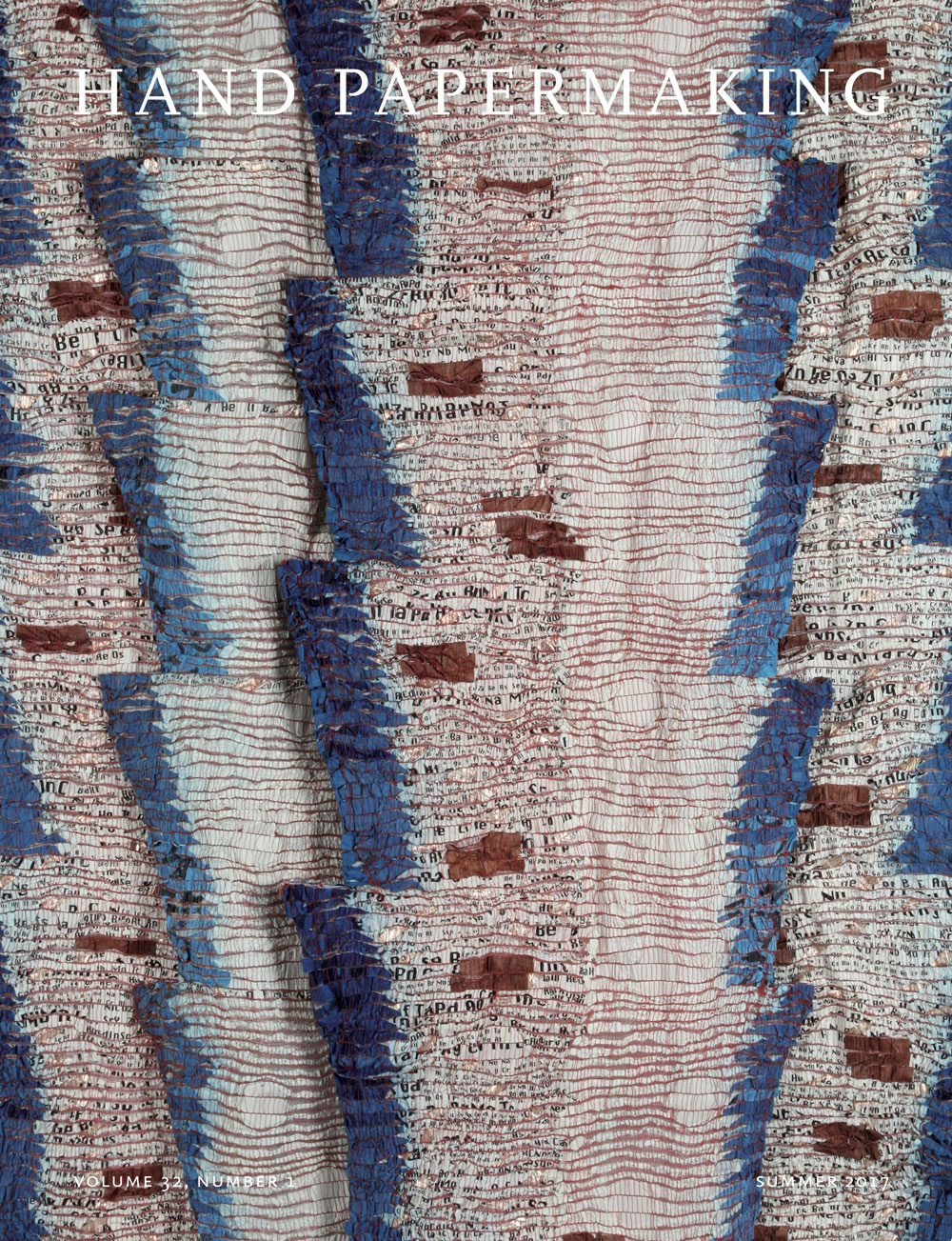 Michael Gill  is a writer and book artist, using woodblock and letterpress to create children's books. His works have been exhibited in solo exhibitions in Cleveland at William Busta Gallery and Tregoning & Co., where they are currently represented. Gill's books are in the collections of Cleveland Public Library, Cleveland Clinic, Grafikwerkstatt in Dresden, Ediciones Vigia in Cuba, and others. He is executive director of the Cleveland–based Collective Arts Network, and founding editor and publisher of its quarterly magazine Can Journal. Iowa–based paper artist Julie McLaughlin has made strong connections in Cleveland, beginning with the Morgan Art of Papermaking Conservatory, where she sits on the board. Her smaller works have appeared in several Northeast Ohio galleries, but her paper kimonos in the Summer 2016 exhibit "Imagined Garment, Imagined Ground" at the Morgan commanded attention. Larger than life, and bathed in light that set the dyed fiber glowing, the individual works held their own in the expansive, former industrial space, and in some cases dominated it. In December 2016, I met with McLaughlin at the Morgan to talk about how a background in theater brought her to making sculptural, three-dimensional works of paper, and what the process and material mean to her.

michael gill (mg): I understand that you began in theater, and that this played a role in your evolution as a paper artist. How did that start? julie mclaughlin (jm): Near the small town where we lived—Dysart, Iowa—there was a small professional theater, and I started volun¬teering in the costume shop. When they lost their costume designer, I got the full-time job, so I designed, constructed, did everything. After a time, I realized I hadn't even finished college yet because life got in the way. So I went back to school at the University of North¬ern Iowa as a theater major to study costuming, and that is where I learned to pattern and drape and do all the things that I do now mg: Your work as a costumer makes the connection to the kimonos and other wearable forms, but what about the paper as a material? jm: While I was studying theater, I took a drawing class over in the art department from a gentleman who was a printmaker, and he coerced me to take an etching class. I eventually moved over to the art building. Theater became my minor, and I got a degree in print¬making.  The head of the printmaking department was a woman named Jo Siddens, and she was a papermaker. It took her a long time to convince me to take a papermaking class, because printmaking is such a process anyway. But as soon as I made my first sheet I knew this was where I belonged. I always tell people that what I do now is the melding of these two worlds. mg: That first sheet is a long way from what you are doing now. jm: The way we made paper with her was all cotton. So the sheets were pretty opaque and heavy. I wasn't too thrilled with how paper turned into three-dimensional forms until I started working with Richard Hungerford. He is the one responsible for my early sculp¬tural work. He showed me the over-beaten pulps, how translucent they become, how they can be stretched over an armature and really shrink and change.  mg: What were some of the fibers you were using then, and how did they behave differently? jm: Richard introduced me to abaca and flax. You can put those two fibers in the Hollander beater for hours, and the longer it is in the machine, the more water is pushed into the fiber. When it dries it shrinks a lot and becomes so translucent.  For a show at a small gallery in Cedar Falls \[in 2000\], I made steel corset armatures and covered them in these high-shrinkage fi¬bers. So you have this paper, which you might think is fragile, but I found out that I had to use at least eighth-inch steel rod, because the paper as it dried and shrank would rearrange my armature. It was much stronger than the steel rod. I thought that was perfect, be¬cause of the whole history of how women have been confined, how women are perceived to be fragile, and in need of caretaking, which of course is just not true. So it was a great way to get started in my three-dimensional work. mg: So the first garments you made in paper were the corsets? jm: Yes. Well, I made costumes for a show called Equus \[in 1997\] and the masks were welded steel rods and handmade paper. I patterned them after the bone structure of a horse's head. The light¬ing designer had these backlit, so with every mood swing of the young actor, the lighting would change and these masks would glow in the different colors. It was really very effective. My printmaking professor went to the show and said to me, "I love those horses. I have a catalog of taxidermy molds that \[you could\] just buy." That so turned me off because I hate animal tro¬phy heads hanging on a wall. That's when I made the conscious choice that a corset hanging on the wall was going to be my three-dimensional sculpture.  mg: Talk to me about dyes. I just marvel at the way your papers hold color.  jm: I owe my dye experience to Melissa J. Craig and Rebecca Cross. I rarely use dyes the way the manufacturer tells you. That big gold kimono \[from "Imagined Garment, Imagined Ground"\] is an ex¬ample of how I work—I dye multiple sheets of kozo in different colors, tear them into smaller pieces, and lay them onto a larger kozo sheet. Then I felt the layers together by saturating them with water, pleating them, and squeezing them to remove as much water as possible. Because all these dyes are fresh and not set, as soon as water gets in, it's like a watercolor: they leach and blend with one another. They soak into the paper that doesn't have any dye, and I open that up. I love doing that.  Rebecca Cross is the one who showed me the wonders of in¬digo. I use the pre-reduced indigo because it is easier, and more constant than some of the others. We have grown indigo here at the Morgan but I haven't had as much success with that. And then the kakishibu, which is persimmon juice, is fabulous because you get these beautiful, rich browns. Those are my go-to colors.  mg: Do you still think of the kimonos and clothing relevant to gen¬der issues, as you began with the corsets?  jm: No. With the corsets that was pretty specific. The kimono is a perfect way to showcase the papers. It is such a simple, beautiful shape, and you can just admire the papers. But people who come to see the shows come up with whole stories of where this kimono has been, who inhabited it. These are things I think about when I make them. But as I see them, they are about the material. That is the thing that shines through, the way it shapes and holds dye, and reflects light