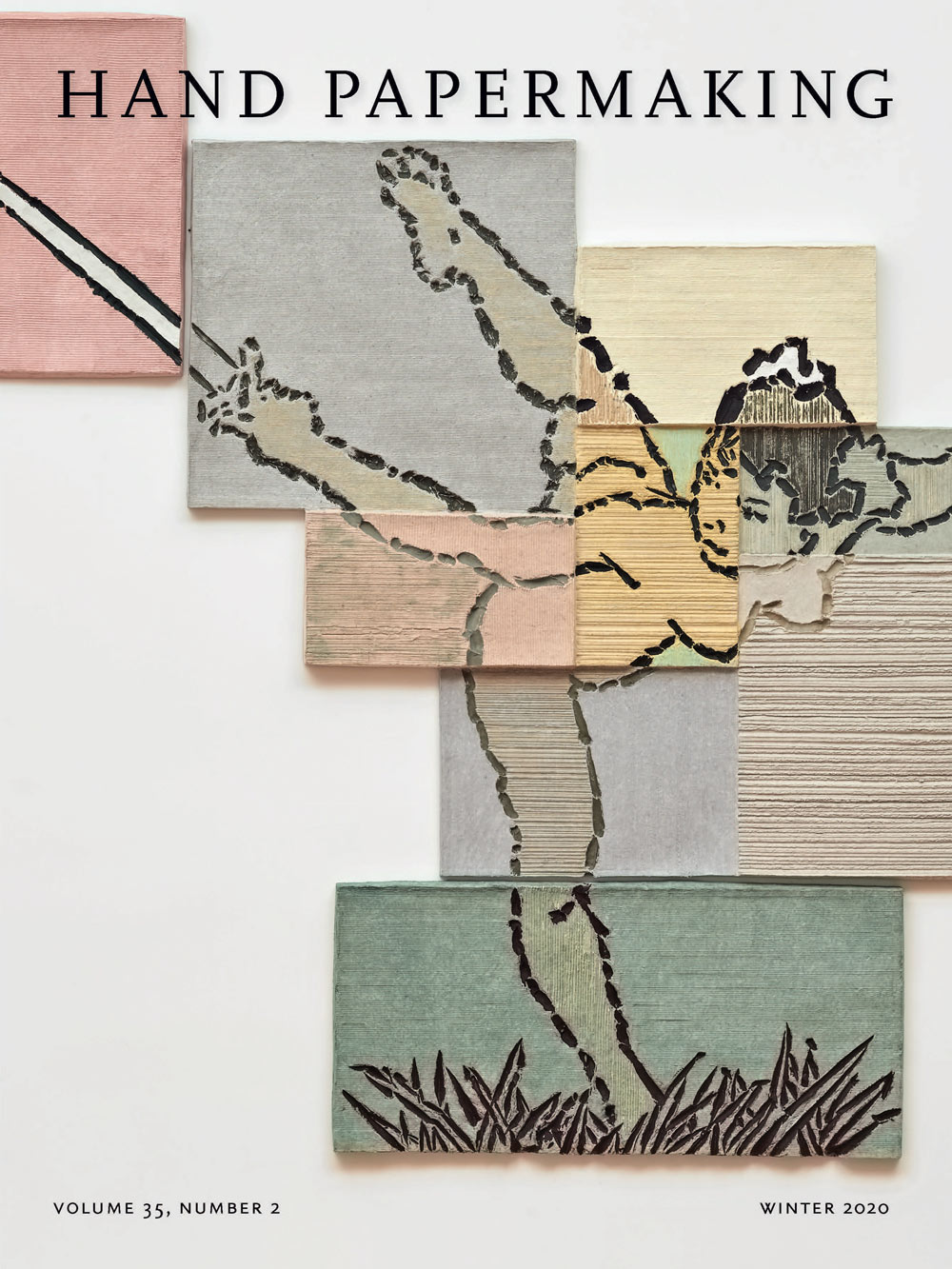 After receiving her MFA from the University of Wisconsin, Madison in 1976, Susan Gosin co-founded Dieu Donné in New York City. She has been involved in the field of hand papermaking as an artist, educator, writer, lecturer, and collaborator for over 40 years. She publishes limited-edition artist books as Dieu Donné Press and has exhibited extensively worldwide. Presently she serves as Co-Chair at Dieu Donné Papermill and as President of Dieu Donné Press.

In September 2019, pioneering book artist and hand papermaker Walter Hamady (1940–2019) died at home near Madison, Wisconsin where he taught at the University of Wisconsin for 37 years. To honor and celebrate his legacy, two exhibitions were mounted in early 2020 at the Jack Ginsberg Centre for Book Arts at the Wits Art Museum in Johannesburg, South Africa, and the Center for Book Arts in New York City. Both exhibitions were cut short by the global coronavirus pandemic.
The South African exhibition showcased many examples from the Jack Ginsberg Centre for Book Arts’ collection of 128 copies of Hamady’s total production of 131 editions. The Centre, which opened in 2018, is a permanent museum gallery for Ginsberg’s world-class collection of artist books. The gallery space’s cases and lighting were designed specifically for artist books and the archive is one of the most comprehensive in the world. It was a gratifying experience to see so many of Walter’s works and those of his students on display together. Walter’s legacy includes not only his many book editions and unique works of art but also his remarkable influence on the revival of the book arts in the United States. Many of Walter’s students developed careers in the book arts at universities and art institutions; to name two: Steve Miller at the University of Alabama and Joe Wilfer at Pace Paper, New York. It was Walter’s graduate book-arts class that inspired me to start Dieu Donné in New York.
On Valentine’s Day 2019, I gave a talk at the Wits Art Museum to introduce Walter’s work to a very engaged group of students and teachers who actively participate in the growing book-arts community of South Africa. Under the leadership of Kim Berman, fine printing and hand papermaking have become integral to the book-arts curriculum at the University of Johannesburg. Students were excited to see and hear about Hamady’s early use of handmade paper, his original approach to book design, his distinctive collaborations with contemporary artists and writers, and the subtlely of his near-perfect printing. Stateside, Ruth Lingen and I organized “Remembering Walter Hamady,” at the Center for Book Arts in New York City. The exhibition was curated by Kelsey King, who also designed and wrote the introduction for the accompanying catalogue. Ruth Lingen contributed an essay to accompany the selection of books that she lent for the show. In a public program, Ruth gave a humorous and well-researched talk about Walter’s work based on her experiences as his assistant in graduate school and her deep appreciation of his work. She pointed out many examples of Walter’s sly humor and wizardry especially evident in his famous Gabberjabbs, a series of books that Walter developed to “let it rip” as a typographer and letterpress printer ‘exceptionnel.’ Ruth also showed Walter’s inventive use of page design and his idiocentric colophons which often included diary-style information about the weather, his daily joys and travails, as well as facts about each book’s production.
For all of Walter Hamady’s students who came away from his classes laughing at his irreverent humor, crying at his exacting standards, and charged with the inspiration that generously flowed through him, we personally owe Walter Hamady tremendous gratitude for helping us learn critical art skills and most importantly learning to trust our muse wherever it takes us. Walter Hamady will be remembered as spearheading the book-arts movement of the late-twentieth century, by his example as an artist and as a master teacher.