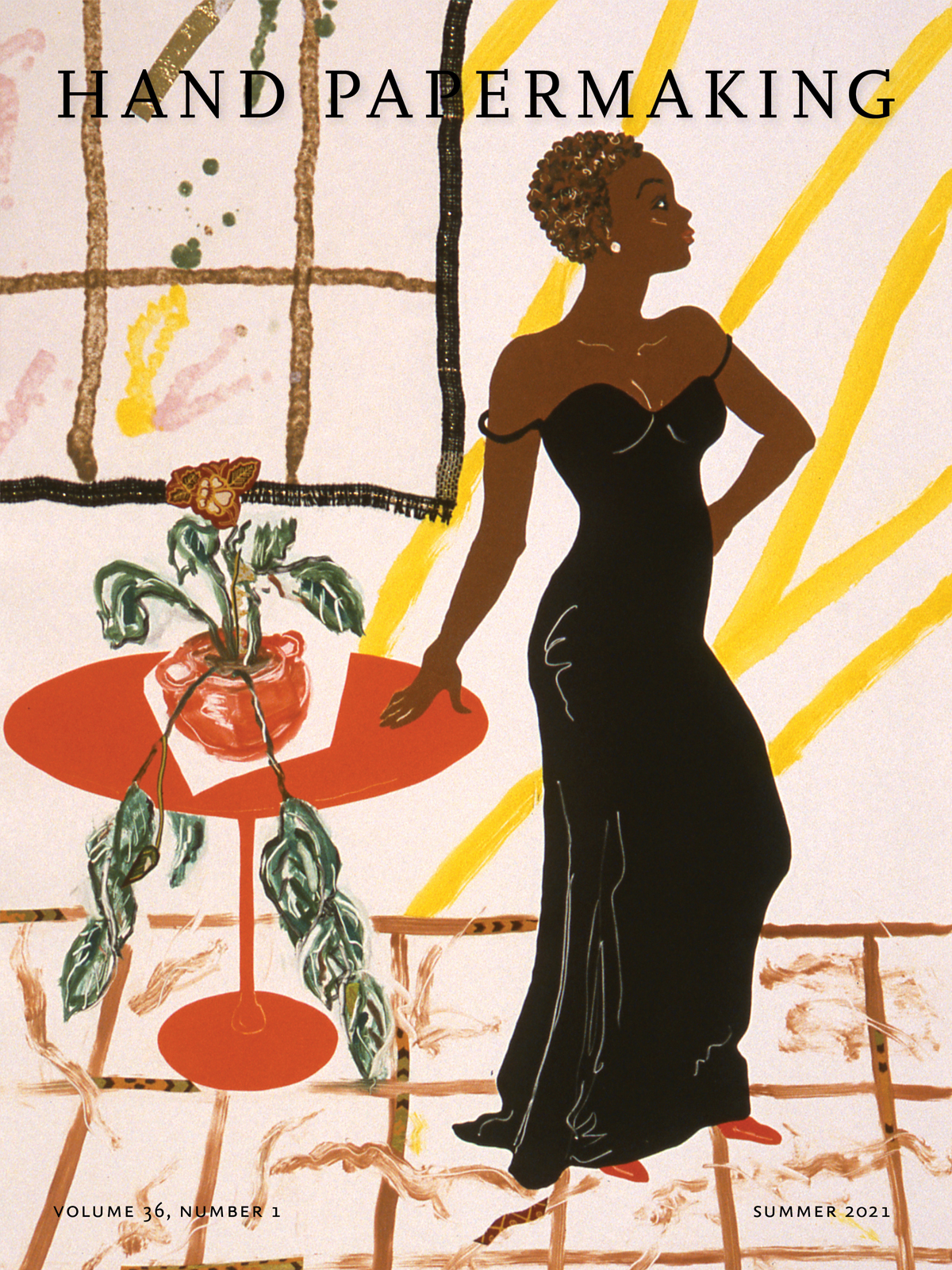 Classically trained artist Preston Sampson (born 1960) works in the mediums of painting, printmaking, and pulp painting. Sampson is a contemporary artist of the Mid-Atlantic region in the localities of the District of Columbia, Maryland, and Virginia (together known as the DMV). I first met Sampson at the Driskell Center at the University of Maryland over a decade ago,1 and have viewed his work at exhibitions held at the Driskell Center, as well as other galleries within the DMV. In December 2020 I began speaking with Sampson to hear more about his background and process, and how he came to papermaking.

Paper Routes—Women to Watch 2020
In Memoriam: Beck Whitehead
A Study of the Origins of Taiwanese Pith “Paper”
Contemporary Artist: Preston Sampson
Spirit Sisters in Conversation: Papermaking, Memory, and Legacies of the Diaspora
Sudipta Das: In Her Own Words
David Carruthers: An Original Figure in the Canadian Papermaking Industry
Papermaking Through Time: The Films of Elaine and Sidney Koretsky
Paper Talk Podcast: An Interview with Helen Hiebert
Suite for Emma Amos

Classically trained artist Preston Sampson (born 1960) works in the mediums of painting, printmaking, and pulp painting. Sampson is a contemporary artist of the Mid-Atlantic region in the localities of the District of Columbia, Maryland, and Virginia (together known as the DMV). I first met Sampson at the Driskell Center at the University of Maryland over a decade ago,1 and have viewed his work at exhibitions held at the Driskell Center, as well as other galleries within the DMV. In December 2020 I began speaking with Sampson to hear more about his background and process, and how he came to papermaking.

Preston Sampson was formidably inspired by his grandmother Lydia Lowe. “Growing up in West Palm Beach, Florida in the 1960s,” Sampson remembered, “my gramma sewed for the rich folk in Palm Beach. She was my babysitter from my earliest memory until preschool. I would sit at her feet and collect the scraps of colorful and patterned fabrics and organize them into things, people, animals, whatever. I was from an early age fascinated with textile, collage, and color.” In his pulp painting titled New Walk (2005), Sampson created a beautiful portrait of his mother and grandmother, incorporating patterned fabric, an homage to his grandmother’s quiltmaking that he remembers from his youth. The seeds of observation and interest in materials were planted from an early age.

Sampson’s skill and expression evolved throughout his academic experiences in the 1980s at the University of Maryland, where he was taught by Dr. David Driskell, chair of the Department of Art from 1978 to 1983. Sampson observed that Driskell made art in those days all the time; he created numerous small works. Sampson credits Driskell for sparking his curiosity about pulp painting. Driskell’s influence is shown in Sampson’s mixed-media work in which he integrates pulp painting with collage and drawing.

Sampson’s practice as a portrait and figurative painter resonates with the Ash Can School movement. Sampson is a narrative storyteller using the lives of African Americans as his subject. His palette consists of light pastel color hues. Sampson gave insight about the intent of his palette, “My aim is to move the viewer into the mood and moment with the use of color and gesture; to feel certain changes, like fleeting moments of memory or dreams.” His journey to creating pulp paintings began after several formal breakthroughs in printmaking, encaustics, and a mixed-media approach to his works on wood and aluminum.

Social Realism is also a constant in his work. The lives of the people that he paints are typically African Americans living under challenging socio-political conditions in the DMV, the vortex of political power within the United States. There are two places where DMV creatives go to make paper—Pyramid Atlantic or Reading Road Studio. Pyramid Atlantic, now located in Hyattsville, Maryland, was founded by Helen Frederick more than 40 years ago and continues to thrive as a place where artists undertake collaborative projects in print, paper, and book arts. Reading Road Studio—established by Frederick in 2017 in Silver Spring, Maryland—is Frederick’s personal studio and workspace for artist collaborations in handmade paper. Sampson has utilized both locations to further develop his skill and technique. “During Pyramid Atlantic years, and now at Reading Road Studio,” Frederick noted, “[Sampson and I] are more than willing to listen to each other as veteran artists to problem solve, and put two sets of eyes on the work together, and always remain open to another way, rather than relying on [our] own personal customary devices. In a collaboration there is a gratifying sense of accountability, investing energy in a short period of time, and learning when to stop within the ever-evolving diverse opportunities of the brush, stencils, fabric collage, scarring the surface, and plenty more.”2

Frederick remembered Sampson’s very first pulp painting titled Thinking Man, created at Pyramid Atlantic in 1998: “The image speaks with a directness of intuitive linear and painterly structure.”3 Since that time, Sampson has strengthened his pulp-painting processes, evident in his most recent pulp painting titled Native III, a striking portrait of a woman, created at Reading Road Studio in 2020 during the COVID pandemic. “Native III is the third painting in this series,” said Sampson, “inspired by time spent in a studio in Capital Hill where I observed the African-American residents’ expressions as gentrification began to overflow in their community.”

Preston Sampson is not singular as an African American male using the hand papermaking process. Other notable African-American male artists who use the hand papermaking process are Sam Gilliam, Willie Cole, Willie Birch, and Melvin Edwards. A study of Sampson’s paper-art oeuvre brings to my mind strong qualities of lyrical feminine energy. Although, Sampson stated, “I would not emphasize femininity in regards to my work, if anything I would describe it as ethereal.” After a long discussion about this point, Sampson and I agreed that his work has a strong balance of male and female energy. We both wondered if perhaps it was the intergenerational transfer of creative genes passed on by his grandmother. In our conversations, we discovered that we share a similar background and early influences as artists. We were both born and raised in Florida, and both of our grandmothers were our primary caretakers and were both quilt makers. We were shaped early on by our grandmothers, and I think it is possible to feel his grandmother’s influences in Sampson’s extraordinary and continuing body of pulp paintings.

1. The David C. Driskell Center for the Study of the Visual Arts and Culture of African Americans and the African Diaspora (DCDC) is located at the University of Maryland, College Park. It honors the legacy of David C. Driskell (1931–2020), a distinguished professor emeritus of art, artist, art historian, collector, curator, and philanthropist. I (the author) volunteered as an ambassador to the DCDC from 2015 to 2018, after which I began serving as a senior advisor.

2. Helen Frederick, interview with the author, November 17, 2020, by telephone and email.

David Driskell, Spirits, 1991, 10 x 12 inches, mixed media on artist-made paper, created at David Driskell studio, Hyattsville, Maryland. Preston Sampson references this work as the one that inspired him to start exploring the medium of pulp painting. The work hangs in Sampson’s studio in Silver Spring, Maryland.

Preston Sampson, Homeboy Ralph, 2020, 42 x 25 inches, pulp painting (overbeaten cotton, pigment) on cotton/abaca base sheet. Sampson’s work is often a narrative centered on the common African American. This work is an homage to an African American male who resides in West Palm Beach, Florida. Sampson chose this subject as he was captured by the colorfulness and the meticulousness of dress of this person from the LGBTQ community. Sampson thought it exemplified pride in self and pride in one’s community.